Wellington, FL. (August 28, 2018) – Battling the summer heat in the shade of the Palm Beach Equine Complex, the Gold Coast Dressage Society Shade I & II allowed local riders to shine. One rider in particular had outstanding success this weekend securing top scores was Para Equestrian Eleanor Brimmer and Argentinia.
Brimmer is originally from Plymoth, Minnesota, miles away from the Triple Crown headquarters, and now resides year round in Wellington, Fl. Brimmer competes in Grade III, due to Cerebral Palsy, but that has never hindered her passion for horses and riding. Growing up in a family with six generations of foxhunters, it came as no surprise that Brimmer first started riding hunters. In 2009, however; she made the switch to dressage, where she discovered high performance Para-Dressage. “Para means parallel. Para dressage is not a step down, but a step sideways,” said Brimmer.
Riding her own sixteen-year-old Hanoverian mare, Argentinia, in the Para Equestrian TOC Saturday and Sunday, they scored a 66.618% and 72.500% respectively each day and clinched the Triple Crown Excellence Award along the way. This pair has been together a short amount of time, but has already made leaps and bounds in improvements. “I am really proud of her! She rose to the occasion … and she just rocked it!” said Brimmer of her tests this weekend. Moving forward, the pair hopes to keep improving and compete in the CPEDI during the Adequan Global Dressage Festival in 2019, and travel to Europe next summer in preparation for Tokyo 2020.
Having grown up minutes away from the original Triple Crown Nutrition forage plant, Brimmer is well versed in the benefits of feeding a top tier feed. “I use Alfa-Lox®. It’s a super product and I am very excited to have won this award!” said Brimmer.
Triple Crown Nutrition is a U.S.-based company known for its commitment to equine nutrition and support of horse sports.  In fact, Triple Crown is the Official Feed Sponsor of the U.S. Equestrian’s Dressage Team, Eventing Team and Show Jumping Team. It is also the official feed of the United States Pony Club and partner with the National Barrel Horse Association.
When it comes to fulfilling performance horses’ nutritional needs during intense competition, there is no substitute for supreme quality feeds. Triple Crown feeds feature revolutionary formulations, premium ingredients and EquiMix® Technology, an innovative blend of advanced supplements, in every bag. Committed to supporting the dietary needs of horses across disciplines, Triple Crown was the first company to add prebiotics, probiotics, and organic minerals to its feed. Consumers can always rely on a corn free, ‘fixed formula’ recipe with added digestive enzymes that remains the same over time, regardless of rising ingredient costs.
To learn more about how Triple Crown Nutrition, the Official Feed Sponsor of the U.S. Dressage Team, the U.S. Eventing Team, and the U.S. Show Jumping Team, please visit the company’s website at www.TripleCrownFeed.com or check their official Facebook or Instagram @triplecrownfeed.
Photo: Eleanor Brimmer beaming with pride after winning the Triple Crown Excellence Award! 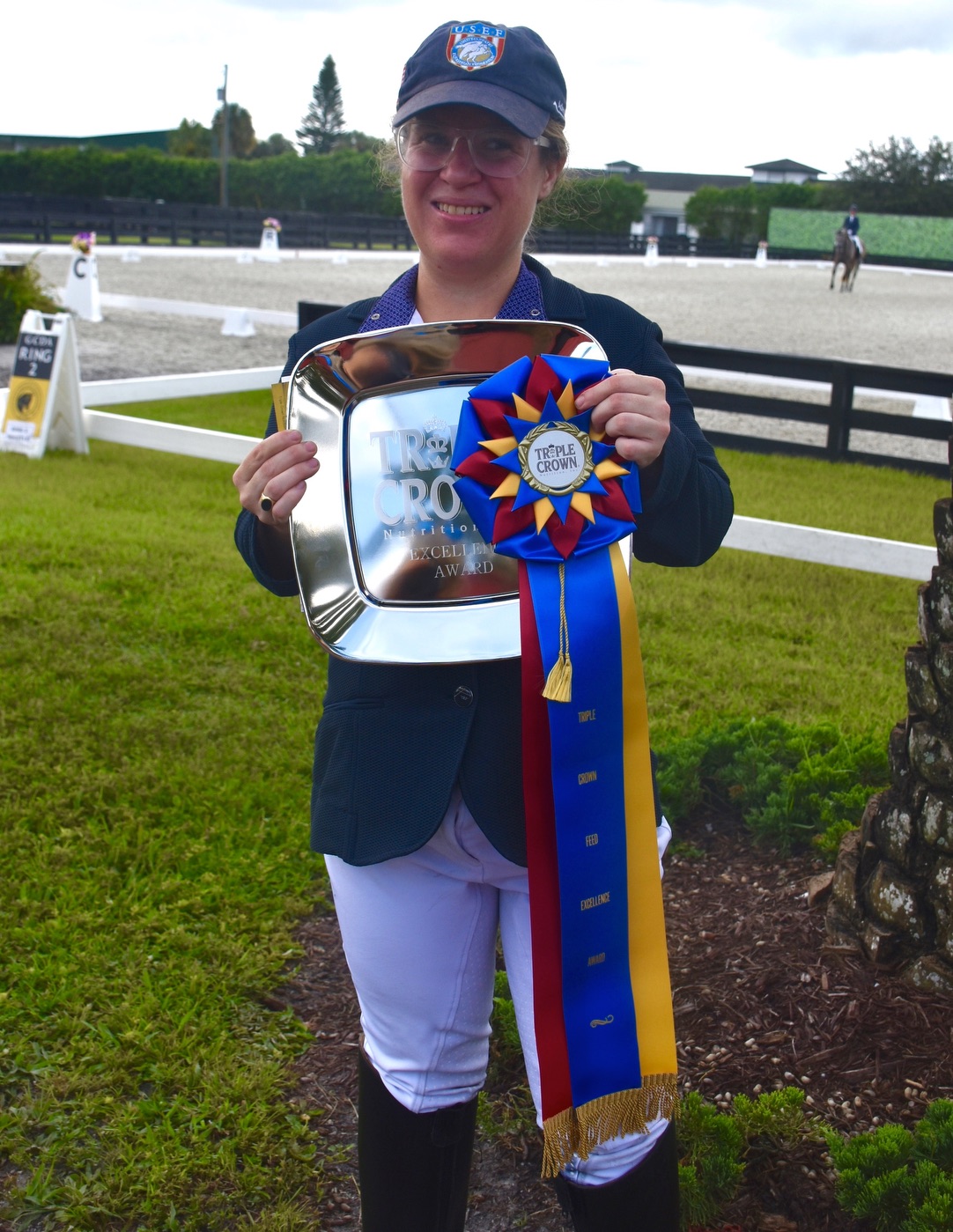